FOCUS – Will there be a cable car connection from Fontaine to Saint-Martin-le-Vinoux tram junction, in 2021? The cable car, which promises to cover 3.7 kilometres in 15 minutes, is on track. But, stung by the episode of Vercors, its promoters have kept the plans quiet.

After a very controversial project in Vercors, which was abandoned, the Metro turns toward the valley. © La Métro

Will Grenoble get its cable car (at last)? After much research, both in the south and north of the town, and an aborted project in Vercors, the cable car is back, but this time, the urban version.

This time, there will be a transversal connection. Northwest of Grenoble, in 2021, a cable car could connect the 3.7 km, from Fontaine to Saint-Martin-le-Vinoux, spanning two rivers (the Drac and the Isère), the motorway (the A480 ), the main road (the RN481) and the railway.

The objective? To connect tramway lines A, B and E within 15 minutes of each other, thus improving the intermodal crosslinks.

Also to ease the traffic in an already congested area, as the development projects on the Peninsula, in Oxford Park, on the Esplanade and in the Portes du Vercors, are well underway… Just on the Peninsula alone, with the increased urbanization, 70,000 additional trips are predicted, every day.

In short, we need to « think travel, before the end of the development operations », as the president of the metropolis, Christophe Ferrari, pointed out during the presentation of the project at the beginning of October. And it is urgent… Every day, 100,000 vehicles pile onto the A480, with its cohort of traffic jams.

« It’s a sector with large-scale urban projects », confirms Yann Mongaburu, vice-president delegated to travel. « It is vital that the need to travel does not increase traffic in the sector. We must, therefore, offer an alternative inexpensive means of transport ».

In fact, integrated into the existing network, travelling by cable car will be included in the urban transport ticket. Bonus!

For the president of the Metropolis, the cable car only has advantages.

Well almost! The issue of potential visual impact remains, but the cable car is « safe, reliable and silent ». It’s perhaps not as fast as a bike, but for the moment, no better solution has been found.

Will it be expensive? Certainly less than the tram, and the 300 million euros invested in the 12km of line E… The Métrocâble is expected to cost between 54 and 60 million euros, depending on the options (size or standing of the cabins, choice of pylons, possible automated stations…) and the number of stations (four or five)*.

By the 2030 deadline, the project plans to transport 8,500 passengers per day, from 5am to 9pm. Its promoters reserve the right to exploit it at night to transport freight “at a later date”… 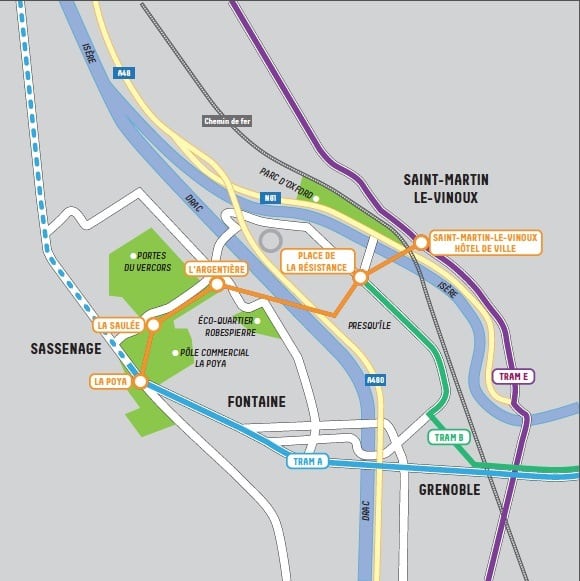 Stung by the episode of Vercors, its promoters have kept the plans quiet. As of Monday 5th October, until 13th November, 2015, users are invited to give their opinion (see below), either following workshops, on records kept in the local town halls or online

The cable car must now prove itself… on paper, because the project has a competitor: the Chrono bus. Plan B? For Christophe Ferrari, (another) failure is out of the question.

Once consultation is complete, the metropolitan officials will deliberate and vote, in order to make a decision at the end of the year. After a public inquiry (expected in 2018), work should start in 2020, and be ready to put into service in 2021.