FOCUS – The toxoplasmosis parasite. Pregnant women know it well, because of the risks it brings to the foetus. Researchers from Grenoble too, as they have been studying it for several years, and with good reason. Over millions of years of evolution, Toxoplasma gondii has developed the ability to stop inflammatory reaction. A unique mechanism that opens the door to the development of new drugs.

In red, the protein secreted by Toxoplasma gondii in the nucleus of the infected cell, where it will go to control the genes. ARR

The toxoplasmosis parasite is a tiny, and maybe fabulous, living being. Firstly, because, like any good parasite, it has the ability to live and grow by hooking onto its host.

Secondly, due to millions of years of evolution, it has developed the ability to suppress or even stop inflammation.

A mechanism that has greatly interested the researchers of the Institute for advanced biosciences (Inserm/CNRS/Grenoble Alpes University) and the CEA, for several years, working to decipher Toxoplasma gondii; their latest article was published in the Journal of experimental medicine.

We find Toxoplasma gondii everywhere. In raw or undercooked meat, in fruit and unwashed vegetables and in cat litter. It is estimated that half of the French population is infested.

If Toxoplasma gondii has a reputation, it’s because not only is it the bane of non-immune pregnant women, who are at risk of foetal malformations, or even stillbirth, but also patients whose immune system is weakened or immature. The parasite displays an unmatched longevity in the world of microorganisms; the extraordinary ability to survive.

“What we have here is a parasite, very adapted to its host, and it thrives well!”, highlights Mohamed-Ali Hakimi, director of research at Inserm. “It’s a form of symbiotism.” 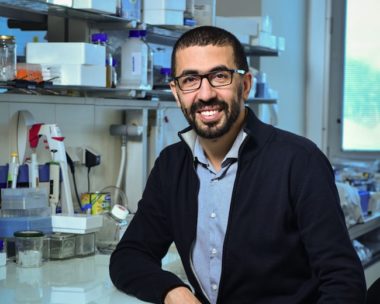 In fact, Toxoplama gondii has developed a unique and ingenious strategy, to take control of the cells.

“It causes transient inflammation, allowing the host cell to kill part of its population of parasites”, says the researcher from Grenoble. “But, not all of them. Some will hide in other parts of the body and cause an anti-inflammatory reaction.”

Even though some viruses and bacteria share the ability of the parasites to modulate the infected animal’s immune system, the complexity with which Toxoplasma gondii plays on the defences of its host is immeasurable. Thus, it controls the pro-inflammatory immune system of the host in order to continue its infectious cycle and take control… persistently.

It’s this anti-inflammatory reaction that the researchers are now seeking to replicate. Work for which the team has obtained funding from the European Research Council (ERC) to the tune of two million euros.

With luck, by copying the mechanism developed by Toxoplasma gondii, the development of new drugs will be possible.