DECRYPTION – By establishing areas prohibited to hunters or closed to hunting on Sunday afternoon, the Haute-Savoie has she shown the way? Isère will not follow the same path. There will be no second no-hunting day in the department. A small consolation prize for associations and the increasing number of participants, who demand a Sunday truce: hunt leaders must be trained by 2018, and signage will be placed at particularly frequented sites.

Friday is the only no-hunting day in Isère, but thinking ahead… slowly. © Gest/Federation of hunting in Isère

There will be no ban on Sunday hunting in Isère. With the new season opening today, and lasting for six months, the possibility of a second no-hunting day in the department seems to have vanished into thin air.

Friday remains the only no-hunting day across the department, despite repeated requests from associations in defense of the environment and the representatives of users, even though eight out of ten French people have demanded that Sunday hunting be stopped, and despite the 300,000 signatures collected in a petition launched by the Aspas .

Whilst in Haute-Savoie, hunting bans or regulated areas (hunting prohibited after 11:30 on Sunday) have been introduced, nothing to report in Isère. The two departments have one thing in common : both recorded a fatal accident in 2015, a walker in Haute-Savoie and a young hiker in Isère.

But, the prefects of the two departments did not have the same answer, because in France, there are no legislative or regulatory schemes to regulate hunting.

Each Department does pretty much as it likes, meaning that nobody really knows what they are doing…

In theory, in the Hexagon, there is nothing to say that hunting cannot take place seven days a week. Indeed, throughout the 96 departments, only six have implemented one or two no-hunting days per week. In Isère and the Hautes-Alpes, it’s Friday; in Jura, it’s Tuesday; in the Haute-Marne, Wednesday; in Savoie, Tuesday and Friday, and in the Haute-Savoie, on Wednesday and Friday – not Sunday for the latter, depending on the areas this year.

Complicated? Even more so, when we look at the map. Hunting associations are not allowed to hunt on certain days, generally due to the over-frequentation of certain areas. Private hunting at Père Gras à la Bastille takes a break on Sunday. At Saint-Martin-le-Vinoux, weekends are usually rather quiet.

Additionally, hunting may be open or closed, depending on altitude. In Revel, for example, in addition to Friday, hunters don’t get out their rifles on Monday and Wednesday, except above 1,800 meters, to track chamois. 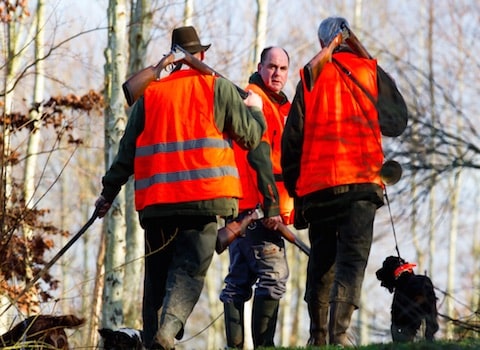 The fact remains that not hunting on Sunday is, for the moment, an exception. Nothing says that the initiative of the haut-savoyard prefect is emulated. In the department, the question is even troubling the president of the departmental federation of Isere hunting : “We don’t want a ban!”, says Jean-Louis Dufresne.

The issue was quickly swept under the carpet during discussions within the reflection group “Hunter safety” * established by the prefect of Isère after the fatal accident, which occurred in October, 2015, in Revel. The Frapna (Rhône-Alpes federation for the protection of nature), were the only association to defend no-hunting Sunday within the group, and visibly held no weight.

It is, nevertheless, not the only one to question the public authorities on this matter. The bird protection League, Mountain Wilderness, the regional Committee of the French Alpine Club and mountain federation, as well as the French Alpine Club Grenoble-Oisans have all already split in a letter to the prefect.

But, it’s the Committee of the French hiking federation that the representative of the State has chosen to represent users in the reflection group.

Coincidence? The latter is on rather good terms with hunters and is hardly defending the idea of a second no-hunting day***. Were the dice loaded from the start? When solicited, the prefecture of Isere did not reply to our interview requests.

What weight do hikers, bikers, riders, or even simple walkers and families hold, when faced with hunters? The first are more likely to aspire to taking in the air, while hunters – whose numbers decline from year to year – represent no more than 1.6 % of the French.

Should cohabitation be stopped? Partitioning of the public? How can the space be shared safely?

Lacking no-hunting Sunday, and waiting to find (another) solution, public power and hunters intend to play the information card in awareness and accountability. Fingers crossed…

Thus, signage will be implemented at the end of September, at six highly frequented pilot sites ** in Isère. The idea is to educate users about the hunting days, and also remind them to respect the security instructions. Like not leaving paths.

In Revel, on 10th October 2015, it was on a forest trail that a young student from Grenoble, was mistaken for a deer ; he was fatally injured.

In such cases, the signs do nothing ; no more than the day-glo orange vests, which must be worn by hunters, also one of the measures of the Isère reflection group. The neon outfit was already compulsory, but not necessarily orange… The associations would appreciate attention to detail.

For walkers, it won’t change much. For hunters, yes, because shots without identification are the main cause of fatal accidents, and the victims, in 85 % of cases, are hunters.

However, there is no requirement for hunters to have training. Only the federations are under the obligation to do so. A casualness that astounds associations. “When we arm someone, we should at least train them!”, points out Fredi Meignan, president of Mountain Wilderness. “A car can be dangerous, but there is the driving license!”

Jean-Louis Dufresne, counts on the accountability of his troops. Each year, his federation trains 350 to 400 hunters. But, they are saturated; “This year, we have done 24 training courses and there are more and more applications.” Today, 10,000 out of the department’s 18,000 hunters will be trained.

At this rate, all of the hunters will be ready in… twenty years. This is without going through the recycling bin, as the associations claim, and with no control from the State on health either.

The only measure made compulsory this year by the prefect of Isère : the training of heads of hunt. By 2018, all leaders of collective hunting must have been trained ; 800 to 900 per year.

Measures hailed by associations, but far from sufficient. “2018 is too late”, highlights Sophie D’Herbomez-Provost, Vice President of Frapna Isère. “We had hoped for 2017… ”

“It is far from a minimum service!”, continues Fredi Meignan, president of Mountain Wilderness. “We can’t stick to not sharing the territory. It doesn’t mean rising against each other. It’s in the general interest.”

Around the table, Frapna says it is ready to take a step : to draw a line through the extra no-hunting day and replace it with two half days, with the Sunday afternoon (still) in the firing line.

On their side, hunters are studying the feasibility of a web application that would identify, and especially make public, the day and opening of hunting areas, as well as the hunting zones. The associations have high expectations of the investigation to be conducted into hunting practices, with the goal being to learn about the sectors and periods where cohabitation may be problematic.

Meanwhile, the prefect of Isère is split over one point of order : it is forbidden to shoot above the roads…

* The reflection group consists of the Department of territories, the Federation of hunters of Isère, the national hunting and wildlife office, the national forestry Office, the County Council, a representative of the mayors of the French Hiking Federation and the Rhône-Alpes Federation for the protection of nature.

*** When contacted, the FFRP of Isère, whose president resigned, did not wish to speak.

The Freydières sector in the town of Revel is one of the busiest corners of the Isère. It was here on 10th October, 2015, that a young French student was fatally injured by a hunter. But, the intended shock wave did not take effect for some afterwards. Here, Sunday remains a day of hunting, like everywhere else in Isère.

The forest path, on which a young backpacker was killed, in Revel, 10th October, 2015. © Xavier Schmidt – France 3 Alpes

Ban hunting on Sunday? “You don’t want to go into the divisions”, abounds Bernard Michon. For the Mayor of this small town, at the gates of the massif of Belledonne, there is no question of partitioning off the public. He speaks of training, accountability and information.

In late September, educational panels will be installed to raise awareness about hunting, and also about the forest environment. “We want to strengthen cohabitation. What is important is the evolution of consciousness and dialogue.” The training of hunters will be strengthened. Above all, the over-frequented Freydières forest road, is now part of the hunting reserve. On this sector, which runs up to the Crozet Lake, hunting is now prohibited.

FRANCE, THE DUNCE’S CAP OF EUROPE

With an average of 150 hunting accidents reported each year, France holds the European record. Even if the trend is moving in a downward direction, over twenty seasons, more than 600 deaths have been recorded by the Hexagon.

On a final note, France is it also, because of the number hunting days. In fact, it is the only country where hunting takes place every day of the week. In the northern half of Europe, the United Kingdom, Denmark and Germany, hunting is prohibited on Sunday. In the southern half, in Italy, Spain and Portugal, hunting is allowed on Sunday, but prohibited on several week days.