FOCUS – “The phase zero review” of the construction of the first nanosatellite ‘made in Grenoble’ is approaching fast! The Franco-Russian team has, in fact, already presented the progress of the project to experienced engineers in the field of space studies. Mathieu Barthélémy, teacher and researcher at the Institute for Planetology and Astrophysics (Ipag) and Director of the space centre at the Grenoble university (CSUG), unveils the Grenoble trademark elements in spatial studies and advances of research on the nanosatellites.

A nanosatellite in orbit (Illustration). DR

Nanosatellite development began at the end of the 1990s. “Initially, they were satellites meant for educational purposes”, said Mathieu Barthélémy. “But, for the last four or five years, scientists and manufacturers have begun to realize the different applications possible in the development of technology or in their original observations.”

The term ‘nanosatellite’ is not yet clearly defined: according to definitions, it can be a satellite weighing less than 50 kilograms, sometimes less than 30, or even less than 10 kg. One thing is certain: the standardization of formats and the different components of the nanosatellites differ from those of their big brothers. The result? Lower costs and the ability to perform more recurring missions.

“When speaking of nanosatellites, we use the term ‘unit’, more specifically ‘CubeSat’, a very standardized type of satellite. These are cubes with a dimension of 10 × 10 × 10 cm, a volume of one litre and a weight of one kilogram. Electrical power consumption is about 1 Watt. There are 6U or 12U CubeSats: larger satellites, consisting of several units”, says Mathieu Barthélémy, adding with a smile: “CubeSat units fit together almost like Lego, although they are far more complicated!”

Mathieu Barthélémy, teacher and researcher at the Institute for Planetology and Astrophysics (Ipag) and Director of the space centre at the Grenoble university (CSUG). © Yuliya Ruzhechka – www.placegrenet.fr

What will the first CSUG satellite be?

We are creating the first nanosatellite in collaboration with Russian students from the National University of electronic technology research (MIET) of Zelenograd. There are two options for this project: either a CubeSat in six units, or a nanosatellite – a little different and a little bigger. The main objective? This satellite will study light emissions, very high up in the atmosphere, at between 100 and 300 km of altitude. In low altitude zones over France, for example, known as the airglow (night sky light), then at high altitudes near the poles, where the emissions are more intense: these are known as the Northern Lights.

What are the other possible uses of nanosatellites, beyond space weather?

Their uses are extremely diverse. The nanosatellite can be used to make observations of the Earth, for example, snow or forest coverage. Alternatively, these small satellites could be used in telecommunications. Researchers are also reflecting upon the use of nanosatellite constellations in the scope of the Internet. For now, it’s not the order of the project, but why not! Currently, we use nanosatellites for demonstrations and technological tests in order to advance the research. 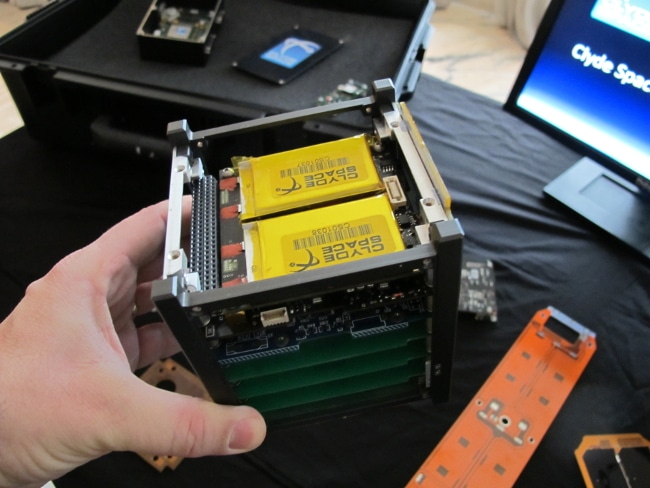 In the long-term, will nanosatellites be able to replace large satellites?

Are there any particularities from Grenoble in the field of nanosatellites?

Grenoble has quite an interesting position: it is a major force in the development of nanotechnology. The Grenoble branding is the miniaturization of space instruments, which will enable the most accurate possible space-based observations. These two points will create the image and strength of the CSUG

A nanosatellite in orbit (illustration). © SkyFi

Does the presence of constellations of satellites above the Earth constitute a danger?

The main danger is the possibility of collision between satellites. It is a situation comparable to road traffic. The question of the dimension of the orbits is very important. We must comply with laws on space operations, as defined by the United Nations. For example, a satellite must fall in less than twenty-five years. When small satellites fall back into the atmosphere, they must burn completely.

Before launching a satellite, we must be able to guarantee that even the largest component that could possibly fall, will not damage anyone or anything.

Is there a difference in the treatment of data collected by the nanosatellites and large satellites?

What do you think of the popularization of science through popular culture, for example, the series The Big Bang Theory?

It’s interesting, because this could bring us future students (smile). But, in Tintin, long ago, as in The Big Bang Theory today, there are a lot of stupid things said. Therefore, be careful! In mechanics courses, I have made silly remarks, for example, from Tintin. As a teacher, I must put things back in place.