DECRYPTION – “Uproar” in terms of communication, the ‘cycle highways‘ have unleashed passions in Grenoble. As for the highways, the plan is to put an ‘express cycle network’ in place, which isn’t an easy task. Feedback on a project that certainly leaves no-one indifferent.

« We should no longer speak of ‘cycle highways!’ » Christophe Ferrari, president of the Grenoble metropolitan area (PS), was keen to make the point, himself. « This ‘word-ram’ is subject to confusion, as well as incorrect attitudes … [see box below, editor’s note] We should now speak of express cycle networks! » Networks that have ultimately nothing in common with highways…

So, what is it all about? « To offer long-distance cycle routes, beyond the city centre, into the neighbouring areas […]

« These structured axes will be in secure dedicated areas, on which a stream of bikes will be able to ride at a speed of 20 km/h, with conditions comparable to those of public transport« , the president explained to journalists, on 5th November.

To permanently end the expression ‘highways‘, Christophe Ferrari drives the point: « The idea is to enable both cyclists and motorists to travel safely […] Bikes will not monopolise the roads! […] Nowadays, we are into area specialization. » That being said, many questions remain…

Between April and June, 2015, a cycle consultation committee*, set up by Metropolitan Grenoble, met three times. It presented its conclusions to the metropolis mobility commission on 9th October.

What is the fruit of this reflection? The proposed express cycle network, consisting of four axes:

The committee also issued proposals for the size of the cycle lanes: they will be bidirectional, a maximum of 4m wide, and secure. « There must be enough room for a cyclist to overtake two bikes riding side-by-side« , comments Philippe Zanolla, host of the cycle/pedestrian committee at the ADTC, who participated in the cycle consultation committee.

Will the express cycle areas be exclusively for bikes (exclusively dedicated to cycling)? « If we want to achieve the objective of moving at an average speed of 20 km/h, this seems obvious« , continues the host of the ADTC.
We imagine that in some places the coexistence of pedestrians, buses, trams, cars and the express cycle network will be complex to implement. 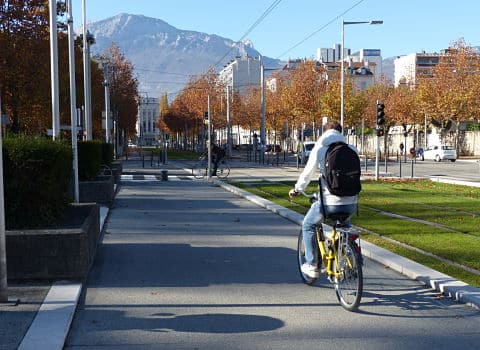 The future cycle lanes of the Express Cycle Network in Grenoble resemble this section of the cycle lane, in front of the Grenoble town hall. © Séverine Cattiaux – placegrenet.fr

It is certain that the traffic will lose some road space to cyclists, but « in a way that aims to include, rather than exclude« , insists the president of the metropolis.

A concrete example that will concern everyone: « One consequence of the express cycle network on boulevard Agutte Sembat, will be the closure of one of the two car lanes« , indicates Philippe Zanolla, which is better than no traffic circulation at all, as some thought…

At the end of the day, the ADTC intends to ensure that the future metropolitan Express Cycle Network is built following the strictest regulations: « At all intersections, it would also be desirable that the express lanes are equipped with detectors, so that bicycles take precedence over motorists, like they do in northern countries! »

Is the discord really over?

The concept of cycle highways has been cleared by the president of the metropolis, the project continues… Some, particularly traders, are eager to have their say. But, it’s not for now; they will need to be patient.

This is what Christophe Ferrari suggests: « There is still some fine tuning to be done. The operational implementation will depend on the situation and be carried out in consultation with local residents and traders… »

« Once the feasibility studies have been completed, we will enter into a consultation phase with local residents and traders, to work out the fine details of the project, which must be consistent with a project for urban commercial revitalization and quality of life… The work is only just beginning.”

Another point of view: that of Jérôme Safar, municipal councillor of the opposition (PS). According to him, the city must take up the issue immediately: « The metropolis works at its own pace. If there were misunderstandings, Grenoble is 100% responsible! It is up to the elected officials from both the city centre, and the other communities, to ensure proximity and information concerning the cycle highways, and in general, any other type of file supported by the metropolis! »

Why create an express cycle network? Is there an indiscriminate love of cycling in Grenoble? Or is it just the wacky idea of the ‘Grenoble laboratory‘, as the local FN leader tends to believe?

It is clear that cycling is becoming more common in all major cities in Europe and in France. Travelling by bicycle is the aspiration of the people, as well as a sustainable development in movement around the city. Paris is working on its express cycle network (REVe), as are Bordeaux, Toulouse et and Strasbourg (Vélostras). It’s not surprising that Grenoble is joining the cycling evolution… « Between 2002 and 2010, the modal share of cycling has increased by 40% in the Grenoble area« , says the president of the metropolis.

In addition to maintaining good health, cycling is a free form of transport – an important argument in times of crisis. Finally, the third challenge for cities including Grenoble: the fight against air pollution. By 2020, Grenoble aims to triple the number of journeys by bicycle, that’s 220,000 trips by bike per day.