DECRYPTION – Digital Grenoble, one of the fourteen French Tech cities, has inaugurated its « Totem », this Wednesday, 23rd September, 2015. A building that embodies the new dynamic digital Grenoble, supposedly to propel international start-ups, boost employment and disseminate the use of digital technology in depth. Guided tour with the key players.

Digital Grenoble has installed its premises, aka « the Totem », in the Orange Group building, at 16 Boulevard Maréchal Lyautey, opposite the Pathé Chavant cinema.

Digital Grenoble? Yes, think back to October 2014, when the French Tech label was awarded to the Grenoble region by the State. Once labelled, the « Metropolis French Tech » had indeed committed to finding a « Totem » building.

It has been inaugurated on Wednesday 23rd September at 6:30pm, nearly a year after the labelling.

Why this geographical choice? « The central location of the Orange building was preferable to the Bouchayer-Viallet neighborhood or Europole », says Loris Nicolas, responsible for operational coordination of Digital Grenoble. The fact that Orange is a very accommodating owner (see ‘La Métropole veut passer la main’ at bottom of page) probably also weighed in the balance.

The opening of the Totem was thus, long awaited. « We had planned to open in January, but the work was not finished. Finally, it was done on 26th August, which did not help the visibility of Digital Grenoble », recognizes Jean-Pierre Verjus, president of the Grenoble label. Despite this delay, however, Digital Grenoble has impregnated consciences. « All of the Grenoble players now speak 100% digital! »

The Totem now offers the possibility to give in depth substance to this common drive towards a digital transformation: chamber of commerce and industry, incubators, nurseries, Inovallée, Minalogic… How? Through two essential functions, according to Jean-Pierre Verjus.

Firstly: « The Totem is the entry point for young entrepreneurs, who have ideas, but little money, where they can grow and flourish. » Secondly: « The Totem will be place of referral, in a digital ecosystem that is a hotbed of players – clusters, competitivity poles, associations, incubators… – for start-ups that need advice in marketing, recruitment, the market, access to technology, to go international…”

Activity at the Totem is currently focused on the ground floor, in 690 m², of the Orange building. « To the right of the entrance is a convivial space for events », explains Loris Nicolas, responsible for operational coordination of Digital Grenoble. We then enter the co-working space, which leads to a cosy living room.

The enterprise Cowork in Grenoble made its mark in early September, taking with it, ‘its’ co-workers. Digital Grenoble has effectively delegated the animation and management of the entire Totem.

« Cowork manages the logistics, the computer network, meeting rooms, reception of freelancers, workspace rental and Digital Grenoble offices, as well as organizing events », confirms Mathieu Genty, to head of Cowork in Grenoble and now the Totem.

In the co-working space, a door opens into the Digital Grenoble area, where a corridor leads to seven offices, almost all occupied. Clust’R numérique, Minalogic, who manages the French Tech pass* and The Digital Company, an accelerator for start-ups**, are installed here, as well as other start-ups… 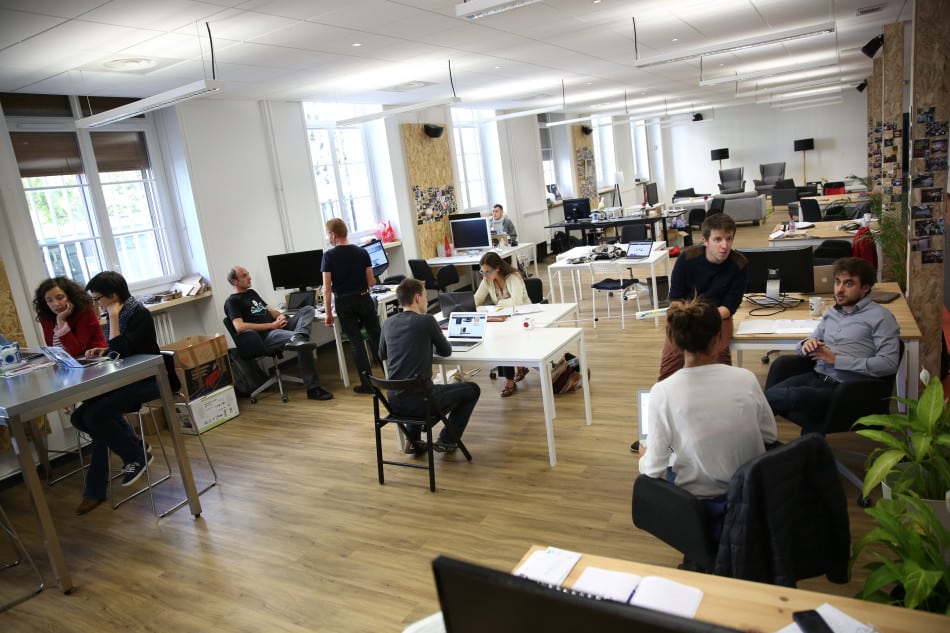 « Digital Grenoble tenants pay 200 euros/m² in rent, all inclusive, per year… This is a consistent price, at the high end of the market, of course, but logical, given the benefits. The idea is not to make a profit on it », assures Loris Nicolas.

« Totem does not intend to play the role of incubator », said the coordinator. « It does not compete with other existing services. » The start-ups that will be hosted on the premises of Digital Grenoble should, therefore, contribute to « inventing a range of services that we do not yet find in the digital ecosystem, » according to Jean-Pierre Verjus.

For the moment, three start-ups have moved into the Digital Grenoble part of the Totem. E-Malaya specializes in digital marketing, while BoardCluster develops a product « that would be interesting for Digital Grenoble. »

A third start-up (yet unnamed) is working on the creation of an intermediation platform, between the needs and skills offered in the digital domain.

Finally, another company has offered Digital Grenoble a new service in « digital support for conventional companies, in customer relations. »

« French Tech has generated a lot of ideas for new services from businesses, to help others to grow in the digital world », rejoice the driving force behind Digital Grenoble. Loris Nicolas is persuaded that: « French Tech, Digital Grenoble and the Totem could be antidotes to « French bashing », whose followers are the French themselves. »

If it does occur, take-off in the digital sector, should mainly result in job creation. Come back and visit the Totem’s 930 m² on the second floor, in a few weeks… if you’re not convinced!

*The French Tech pass offers ‘premium’ services to start-ups that meet certain criteria of hyper-growth, such as showing a 100% growth over three years; criteria sometimes considered too harsh by some digital players…

**Start-up accelerators may file claims for funding from French Tech’s 200 million euros. But, the criteria are, again, apparently very selective. Today, only two accelerators in France have thus received aid.

From Digital Grenoble to ‘French tech in the Alps’

As of today, ten members, the Digital Grenoble Association will soon be transformed into a cooperative society of collective interest (Scic), which will both have a capital, and sell services. « We will fly on our own and will rely less on communities, » says Jean-Pierre Verjus.

The means to potentially allow 650 individuals and 300 companies, who have already given their support to Digital Grenoble’s approach, as well as any newcomer, to have their « share ». Other communities will also still be able to participate.

The Grenoble Metropole should also provide 125,000 euros in capital, for the Scic. The Voironnais and Grésivaudan regions, and the urban community of Annecy (readjusted to the label), are interested. Perhaps Valencia… Savoie Business Angels, near Chambéry, have also shown an interest. Hence the idea that led to « French tech in the Alps », a name that could be formalized with the renewal of the label « Digital Grenoble », which is already due, at the end of the year…