PREVIEW – Canine excrement, illegal dumping of bulky waste, abandoned on the street… Faced with the rise of this anti-social behaviour, the city of Grenoble has decided to proceed with verbalization. The challenge: to improve the sanitation of the streets, despite the declining enrolment in services dedicated to maintenance.

How can we ensure the sanitation of the city, when faced with rising anti-social behaviour and a decreasing number of maintenance workers? Grenoble might have found the solution to this complex problem: verbalization. A project is, in any case, in the pipelines of the new municipality, which is preparing to launch a huge verbalization campaign, in order to improve urban sanitation.

If Grenoble’s elected officials and the concerned department heads did not wish to speak before any official announcements on the topic, territorial union representatives have, themselves, been more voluble.

Anti-social behaviour on the rise

Keeping the city clean. The challenge is daunting, because the urban sanitation workforce are facing an increase in antisocial behaviour on the part of citizens. « All the waste just dumped in this way – like the bulky waste that we aren’t responsible for – has a huge impact », deplores Lilian Dejean, Grenoble urban sanitation agent and CGT delegate.

Illegal dumping of waste in front of a buried sorting container, in the Saint Laurent area. © Elodie Rummelhard – placegrenet.fr

« Not counting the containers that are put out several days before collection day, the burnt out cars and broken bus stop windows already disrupt the organization we are trying to implement. »

Cherif Boutafa, secretary of Isere’s Force departmental working group, also adds « people just throw rubbish out of the window or empty their bins anywhere, even in the glass containers. »

Faced with this upsurge in anti-social behaviour, the urban sanitation service is seeking the support of the city.

A request, which the municipality seems to have answered, with the announced verbalization of recorded acts of anti-social behaviour. « We don’t know precisely when this will be implemented, but it will happen soon », assures Lilian Dejean.

Verbalization will focus on three areas, says the CGT: “Dumping, failure to comply with the rules in the food markets – such as late departures that impede cleaning – and, of course, dog excrement”. However, to find out the rates of fines and the number of municipal officials who will be in charge of verbalization, we will have to wait.

Do better… with less manpower

It must be said that on top of the increasing anti-social behaviour, the services face other challenges, including a decrease in resources. « Even though being an agent of urban sanitation is a thankless job, with a huge lack of consideration, we have always advocated a quality service, and we have always been able to adapt to different municipalities and directors », assures Lilian Dejean. 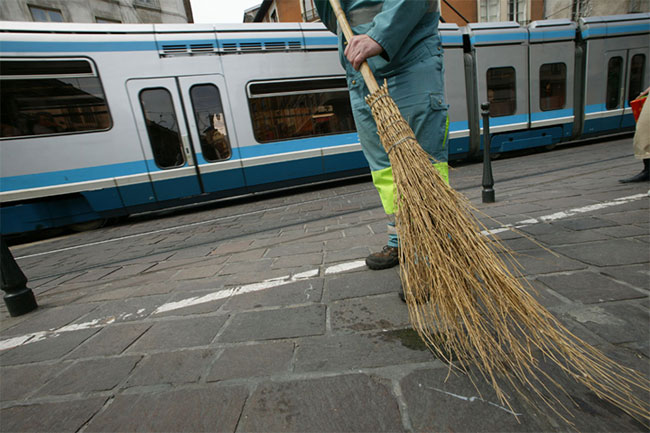 In fact, adaptation is the key-word facing the restructuring of human resources employed by the new municipality in all municipal services; urban sanitation is no exception.

According to Lilian Dejean, a workforce of 180 currently provides this service. Although these positions are not at risk, there are provisionally another 30 posts to fill, and there have been for the past year; however, the city is practicing the suppression of automatic recourse in employing replacement and back-up workers.

« Replacements are needed in times of long-term illness or training periods, for example, and back-up workers are needed during the summer and autumn periods, for the collection of leaves,” he said.

The consequences of such decisions are felt at both ends of the chain, both by the workers, and the users. « Residents either directly complain to the workers or their local elected representative, or they call the hotline, which was set up by the City », states Cherif Boutafa.

Rubbish dumped at the entrance of the Grenoble City Gardens. © Elodie Rummelhard – placegrenet.fr

Still, the complaints are not always justified, he said. « They complain about dog excrement and the lack of rubbish bins on the streets… they say they do not see enough City employees on their street and it is not done every day, whereas our colleagues do pass. »

The urban sanitation plan (PPU) established under the former municipality is indeed disorganized says the CGT. « The PPU aims to put the resources where they are needed, instead of spreading them out evenly everywhere. »

A minimum and maximum passage frequency has, therefore, been established, by district. “It could go from one to fifteen weekly passages, depending on the neighbourhood. There was a repass system, notably in the town centre and in neighbourhoods such as Mistral, Villeneuve, Teisseire and Léon Jouhaux, where we passed several times in the same day », recalls Lilian Dejean.

« And for the collection of leaves, which was not included in the PPU, we rely heavily on reinforcements. »

Will there be an awareness campaign, before reprimanding begins? Not exactly according to Lilian Dejean. « The priority is to inform people, to put the means in place for people to play the game, and only then, to identify the anti-social behaviour. »

Attached to popular education methods, Cherif Boutafa remains convinced that awareness campaigns must be repeated each year, especially when it comes to dog excrement. The City has set up over 150 dogs spaces, equipped with collection bag distributors. Distributors have also been placed in other strategic places around the territory.

« Dog owners tend to abandon their sense of civic responsibility very quickly. Within the city’s urban sanitation service, there is a canine educator, offering dog handling and behaviour training, as well as sanitation awareness training, free of charge.”

Surely more persuasive than the previous actions, verbalization would be an additional way to change the behaviour of some people, complementing the work of agents. Lilian Dejean goes on to say that “Grenoble is the driver and pilot of sanitation at a national level in many projects. »

In terms of verbalization, she seems to be in tune with the times, many French cities having recently adopted similar measures, such as Évian-les-Bains and Perpignan. As for the city of Paris, it intends to implement massive verbalization from October, after making a net increase in fines.

In any case, it will be a difficult task for sworn personnel. But, for a good reason: it will catch offenders red-handed… Will the measures be welcomed by inhabitants? Will they be systematic and truly deterrent? Response in the coming months.