FOCUS – The anti-pollution disc will be tested in Grenoble from November. Not only in Grenoble, but also in Voironnais and Grésivaudan, all vehicles will have to display the correct coloured disc, in order to be able to circulate freely during peak pollution periods.

Grenoble will be the first city to take part in the experiment. The certificates of air quality, more commonly known as anti-pollution discs, will be implemented from November 2015. Along with Strasbourg, unknowingly elected, Grenoble is about to test the disc that, according to its colour, will open or close the city gates to vehicles. 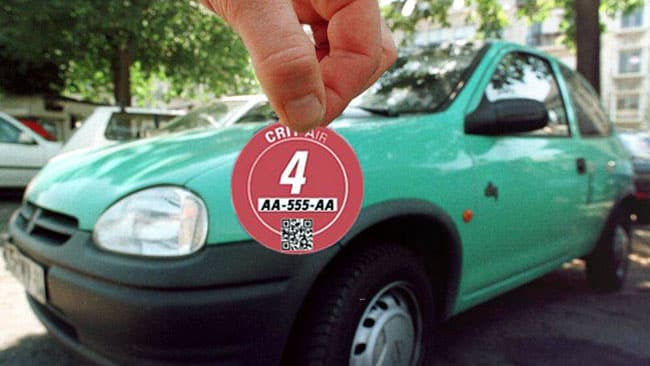 The new disc in front of a polluting diesel vehicle. © Paul Turenne – placegrenet.fr

Parking and traffic calming measures are to be implemented, during peaks in pollution levels; the experiment will last for two months, up to the end of the year. « The idea is to graduate the measures », says Yann Mongaburu, vice president in charge of metropolitan travel. « Today, it’s ‘all or nothing’ and we need to take non-concerted action! »

The idea is also to anticipate pollution peaks. For example, limiting the maximum speed on motorways to 70 km/h before the pollution level increases, and not three days later…

Following the minister’s green light, the agglomeration was given one month to finalize its measures. But already, some vehicles should be left in the garage…

Anti-pollution discs to arrive in the Grenoble metropolis in November

In Grenoble, the discs are separated into seven colours, ranking them from the least to the most pollutant vehicles. Top of the class? The electric vehicle. Bad students? Diesel vehicles registered before 2006 and petrol vehicles from before 1997. These represent 30% of vehicles and do not even have the right to a disc…

Punishment? Alternative measures will be put in place, such as free public transport during high pollution periods, but once again, everything is anticipation.

In a few days, all vehicle owners in the Grenoble area, as well as in Voironnais and Grésivaudan, will receive a disc in their mailbox, free of charge, complete with an explanation about the device

The others? What about drivers from Lyon, among others, who have not yet tested the disc themselves, in their own region? “The disc is a kind of approval to circulate”, resumes Yann Mongaburu. “Those who don’t have it will not be able to circulate.”

All that remains is to enforce the device. How? The chosen action is at best vague. “The question is not to punish; sanction is not the aim of the operation. It is to help the citizens to take up the challenge. They do not understand our inaction, but motorists are the first victims of pollution.”

As well as being tested in the metropolitan area, Voironnais and Grésivaudan will also be concerned. To the north and south of Grenoble, measures will also be implemented.

This device will not appeal to everyone, but perhaps it will prevent history repeating itself. Indeed, in November 2012, schools had to cancel cross country running in Grenoble, because of pollution.